JUMP again: A Forum for New World Culture. A blog by Ray Grist.

Eric Alugas was born and raised in New Orleans, Louisiana.  He studied painting at the University of New Orleans, and was awarded a scholarship to l’Ecole Nationale Superieur des Beaux Arts, in Montpellier and Paris, France.

He lived in Paris for many years, exhibiting there and throughout Europe, before returning to the United States. He now lives in New York, and exhibits there, as well as in Europe, and throughout the United States.
Alugas works through ideas from Myths and Folklore, the Arts and Philosophy, (e.g. Built For Comfort : Willie Dixon in California;  Image: a meditation on Roland Barthes; Embers : from Malcolm X's speeches ; Night Scene III  : from Richard Wright's short stories & Malcolm X's speeches,  Tears : on Frederick Douglass;  Forceful... : thoughts on our society; Sweet : to Lorraine Hansberry; Blackboard... : Plato's cave) and the concrete elements of Painting— the canvas, gesso, paint, the brushstroke, splashes of paint.


He probes those elements: their material use, and the history of their use, i.e.  ideas associated  with, and permeating them.

Each painting, or series of paintings, is an essay, or meditation, which explores both its subject matter and the very nature of the painting materials: each calls for, shatters, pushes and pulls against the other. They are strands woven to form a tapestry of meaning. The result is a painting, a concept - to be read. His paintings are Historical Painting in the profoundest sense: dealing with the encounter of the history of the painting materials, and  the Idea, in the history of painting.

The works are executed in oil paint, some with mixed media, on heavy free hanging canvas, suspended by metal grommets. In Alugas’s work the canvas is as prevalent and integral as the gesso, the gesso as the paint, and the paint as the wall. 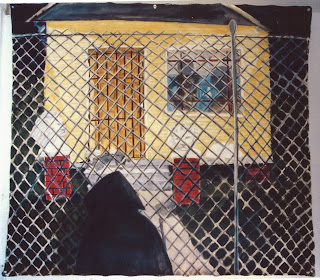 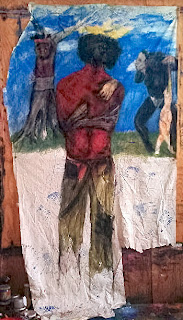